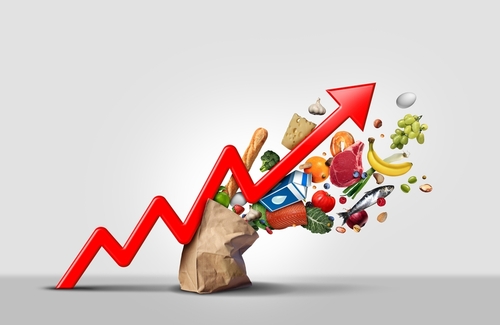 Over the next few months, the most important day for the economy and markets will be around the 11th of each month.  That is when inflation data from the prior month is reported.

This Wednesday, May 11th, the Consumer Price Index (CPI) from April will be released.  The reading for March was 8.5%.  The Fed’s preferred “core rate” (which strips out food and energy) was 6.5% in March…. like food and energy don’t matter….

The consensus is for an April inflation reading of 8.1% and a core reading of 6.0%.

On Thursday, we’ll hear the Producer Price Index (PPI).  In April, the cost to producers increased by 11.2%.

Many investors and advisors (including myself), believe that inflation is in the peaking process – meaning we’re not at the beginning and not near the end.

We expect inflation numbers to continue to run somewhat hot for next handful of months.

Chairman Powell suggested that a .75% rate hike is not on the table.  For 1.5 hours, the market rose strongly.  Then on Thursday, reality hit.  The Fed is suggesting they can get inflation under control without tipping our economy into a recession.  Chair Powell was asked the question: “Do you think the Fed has lost credibility by the public?” His response was no.  I just shook my head!

Bond yields which are front and center, finished the week with the 2-Year Treasury yielding 2.70% and the 10-Year yielding 3.12%.  It’s been a long time since we’ve seen 3% on a 10-Year.  The question, of course, is how much higher do yields run up?  The only thing for certain in my mind is an overshoot on rates.

Bonds are starting to become attractive.  If you have money on the sidelines that is earmarked for bonds within you overall allocation, now may be a good time to begin slowly putting that money to work.

The big question on investors minds (besides rates), is when will the stock market stop declining?  Obviously, an impossible question to answer with any precision.

We are in a true correction.  The forward Price/Earnings ratio of the market is now under 19 times.  We are getting reasonably priced based on current profit expectations.  Some are suggesting a P/E ratio of 18 makes sense, which if accurate, means some more downward pressure.

Let’s keep in mind a couple positives! The employment report last week was very good.  We have an unemployment rate of 3.6%.  Just about everyone I speak with is commenting on higher food, gas and overall prices.  Many are complaining, however at this point, the consumer is NOT backing off from spending.  Look at restaurants, the roads, and stores!!

As corporate profits have cooled from a major increase in 2021, 2022 profits are still expected to rise, however at slower pace.  Used car prices decreased last month for the first time in a long time.

My thoughts…. I don’t believe the Fed will be able kick inflation without hurting the economy by raising rates and taking liquidity out of the economy.  Demand destruction is not the solution.  We have a supply issue.  Whether it’s energy, food, raw materials, etc., we need the global bottlenecks to unclog.  We need to do more inside the US.  If that can happen, then supply can catch up to demand and put things back closer to equilibrium.