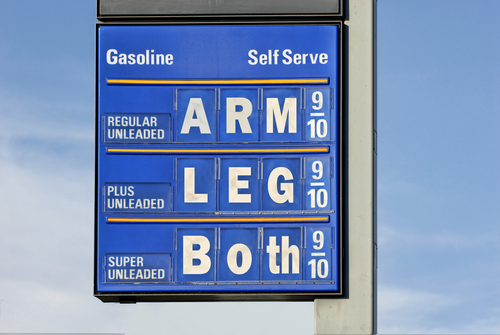 Driving into the office this morning, I noticed Wawa regular is gas priced at $4.29/gallon.  How much higher does gas need to rise before President Biden does something impactful?

During the State of the Union address just last week, he suggested that adding 60 million barrels of oil would help.  Big help…. that’s approximately 3 days of US consumption.

There is absolutely no reason that we should NOT be completely energy independent.  We should be in a position to assist Europe through this crisis, however we now have a crisis of our own, and only WE are to blame!!  I have no issue with “green” energy developments, however it appears completely unrealistic that we can simply turn the switch.

Hopefully the administration is not counting on an agreement with Iraq to produce more oil!

So, what’s the solution?  I wish I knew the factual answer.  Consumer confidence will slide quickly, which will impact the current robust consumer spending, which can be a double whammy!  Perhaps turning on the oil spigots aggressively for the time being will help?  I’m not an energy expert however I understand supply and demand/Economics 101.  We need more supply!  We need it now!  Let’s forget politics for the time being, and start being PROACTIVE!

Last week Fed Chairman Powell was on Capital Hill.  He stated he would raise rates .25% this month.  He also recognized the dangers of the Russia/Ukraine war.

It sounds like Powell will raise rates gradually… a .25% at each meeting for the balance of 2022, which in my opinion could be appropriate and not choke off the economy.

I would not want his job, as he now has to contend with even more inflation and the possibility of a slowing economy, should the current situation persist.  After his testimony, the markets rose for two days because for the first time, Powell appeared to be sensitive to the current situation.  I placed a “stamp” back in his envelope.  I had prior taken all stamps out!

What Powell actually does from here?  As always, time will tell.

The February jobs report was released last Friday.  It of course, was overshadowed by the “other” news.

Leisure and hospitality jobs led the way, with 179k hires.

The median duration of unemployment fell to 9.6 weeks, from 17.9 weeks one year ago.

This is all good news.  Michelle and I had dinner at the local Marlton Bistro di Marino.  For the first time, they had a plenty of waiters and staff.  It was great to see!

It was also great to see how enthusiastic these young folks appeared to make sure we a had a nice dining experience, and we certainly did!

Hoping the inflation and oil issues do not reverse the hiring trends of late.  Higher overall prices with potentially slowing growth can lead to workers receiving pink slips!!

Headwinds were even heavier for foreign stocks, losing (6.50%) and emerging markets shedding (2.29%).